Hopefully I will manage to post about the week's events as I always try to do, but I may not have the luxury of as much time as I normally have, as my wife and I have a couple of important things to negotiate, so this week may be one of those that catches up with me.

As regular readers will know, last Saturday 8 March 2014 was the town of Goole's annual Hobbies Exhibition, so on a bright, dry morning a number of us gathered in the car park with dozens of other groups, keen to get to their allotted tables and set up in time before the multitudinous throng that ambles by during the course of the day begins to make its first appearance.

Our cars were quite full of 'gear', so the folding trolley that comes as standard with my car was worth its weight in gold. After mastering the 3D Rubik frame that is John's portable display it was down to 'hanging', a quick tidying up and we were ready! Tea-break. 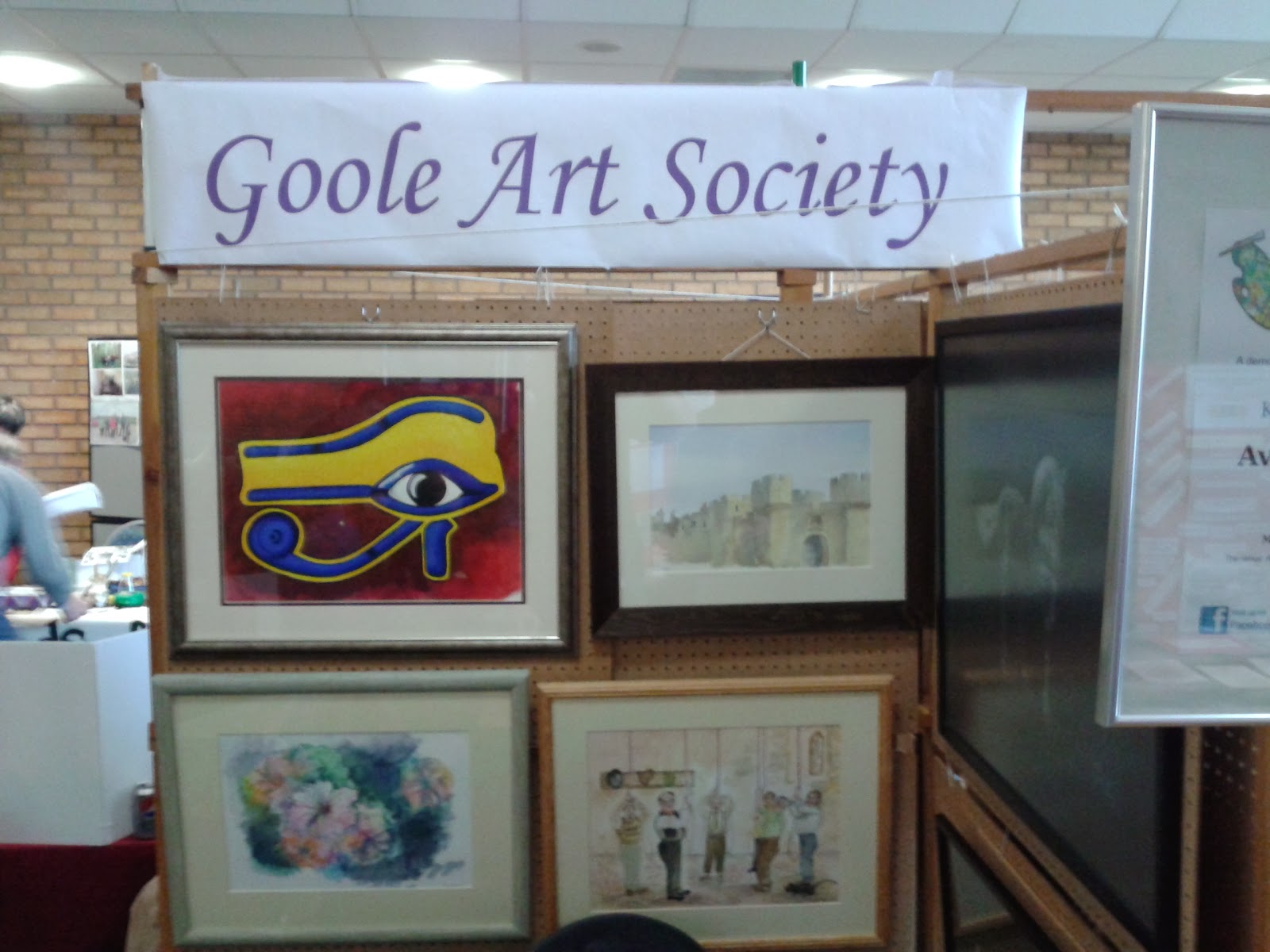 This year we had more of our work on display as we learnt from last year and thought to bring along a dozen table easels to help cover the tables we have. Being on the end of an aisle is quite a big advantage as we are allotted 3 tables - 'all the more space to display your work on' I hear you all say.

Like all groups around the world, be they artistic or not, we used the rest of the space to position leaflets informing folks of our existence (just in case they had missed us being there), our programme of events and other relevant things. There are always ways to improve yourself, & Brian & I are strong advocates of this. We constantly look for ways to make whatever we do appear that little bit more 'professional' as we believe that 'image' helps in so many ways. Tea-break.

After what appeared to be a slow start to what I can remember from last year, the crowds finally began to arrive in numbers. A slow start like that is not all bad news, making sure the stand is manned it gives us time to wander off in one's and two's and have our own look round to see what else is available to view, if there is any 'competition' or maybe we could make a mutually beneficial treaty with someone? As it happens, we did. A very nice lady representing the local small theatre and our Brian had a conversation which could prove a plus to both groups. Later on we found out her husband enjoyed painting some years back, but like we all do, things emerged on his horizon, time lapsed, priorities changed but he was quite keen to become involved once again. Nothing short of a signed 'Royal Charter' to prove he would not be co-opted into any committee position and he left a happy man. Not half as happy as his wife who was more than thrilled to find out he would be leaving her home alone to do her own thing at least on night per week. Tea-break. 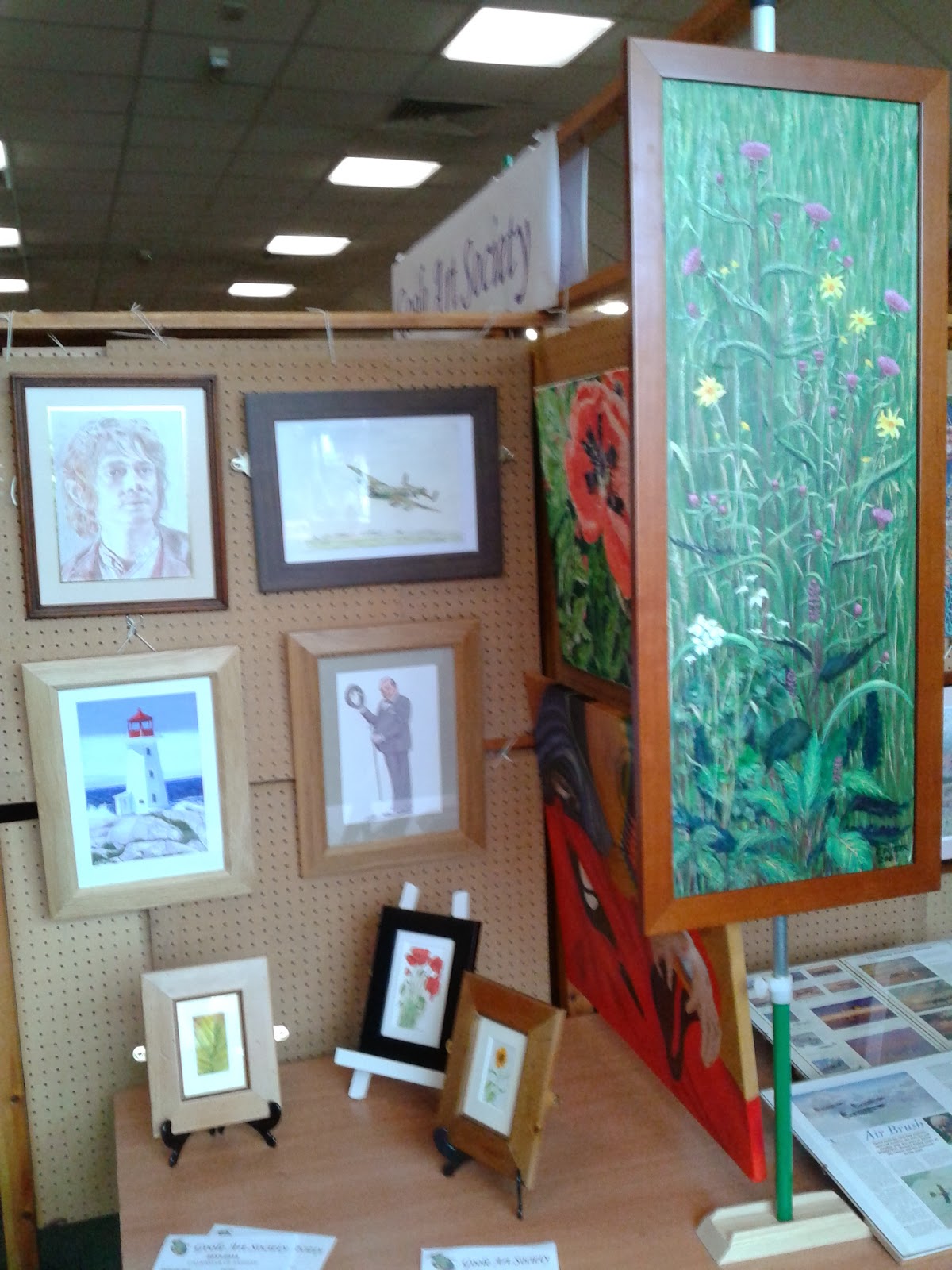 The public began to increase in numbers and we were soon very busy indeed doing our best to answer the usual related questions as to individual works regarding the medium used, styles, subjects etc. etc.

It really is quite interesting to hear what we would regard as 'the general public' comment on what we have produced and put on display. I am sure that there are many more people who either like art, would want to get back into what they did often many years ago, or simply wished they had 'the talent' to be able to produce something they could be proud of. These people are ideal material for us to engage longer with, and to encourage them to try and come along to one of our nights, or be it to simply give it a go in the privacy of their own homes. Tea-break in between chatting.

Basically our artists are all like big schoolkids who still get just as much satisfaction from someone recognising and enjoying looking at a face, landmark or object that any of us have worked on. This is something that I feel has increased this year as more of the passers by actually stopped to speak about what was on display, other than that short, unappreciative phrase of 'that's nice' and a nod to something in the general direction of something you are not sure what, as they continue along as if on some form of conveyor belt that cannot stop to take in what they are actually looking at.

The day continued along in much the same vein. Lots of smiles, lots of trying to engage, plenty of chatting to those willing to stop and talk, as many leaflets as we could put into hands and quite a bit of banter in between with those on adjacent tables. The whole event is a good couple of hours out, with dozens of different groups and tables covering a very wide range of subjects, many relevant to the host town like local history groups etc, but also things that interest children too. Personally, I managed to purchase a DVD on the D-Day landings made up from original newsreels and the army's own film crews, and a book on a local man who rose to the rank of Captain in Nelson's Navy, signed by the author. Result  One of our members was completely baffled by the magician who pulled a stunt on him, and he was still talking about it on Monday night! So, after a little wander round it was back to our stand. Tea-break.

Come the end of the day we had seven(!) people who were interested enough to seriously consider giving us a try, with maybe three of them I would put down as 'definates'. That was a major leap forward from the 'one' we managed last year. The whole day had been a success; we had advertised our presence; recruited potential new members; hopefully become closely involved with a local landmark and received many seriously supportive comments.

We have plans and improvements afoot for next year already, but we must first look forward to our next event which is the Summer Exhibition, held aboard Barge 58 at the Yorkshire Waterways Museum. I did this last year for the first time, and it was amazing. Hope this year's is just as good.

Tea-break whilst I reminisce, sit and think about writing up Monday nights blog.